during the past 15 years this band has managed to stick with it, at least in the studio in one form or another writing & recording songs at guitarist Jeff Mark's POWERHOUSE STUDIOS .folowing matt mcourt's brief departure Bassist danny Kurth left as well and were replaced by Michael Furlong and Rick Bartell . Drummer Deen Castronovo left the band to join Tony Macalpine after recording Dr Mastermind with Mccourt for Shrapnel records. 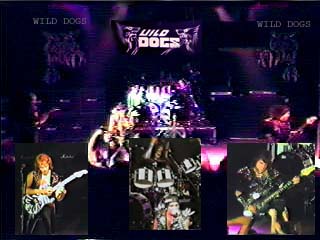 . that year the band did a short tour of the region sponsored in part by Musiclord an amp company based in their favorite destination Seattle. Now famous for the grunge phenomenon, if you look back just a few years before,.. it was the hotbed of heavy metal

"We had Metal Church, Queensryche- who were called Myth at the time, Randy Hansen,Taime Down- of Faster Pussycat- all on the same bill -back in those days playin at big roller rinks that held like 1000 people or more it made ya feel like superman -Seattle treated us like stars." As Grunge stole the spotlight in the early 90's ,rejuvenating a biz that had become a factory of costume box rock stars. wild dogs was, for a while anyway out of style. Deen went out as a mercenary for big timers matt and jeff slugging out 5 sets 6 nights a week covering "all the junior bands that used to watch us in Seattle and open for us-pearl jam,nirvana,alice in chains like musical pergutory. we bailed on the live thing and went into the studio, jeff built a studio - matt learned video production and started working in films and tv . and hosting his own shows "Living Room Concert Hall and The Mattison Avenoo Show .The Dogs recorded in cycles during these years as in the beginning used the band as a songwriting workshop and jeff's studio as the notepad" we figured that it definitely wasn't time to re- emerge yet and we didn't want to waste our material " they have been working with Larry Davis, formerly with Eddie Money. larry is the drummer on shattered rain from the 94 demoand recently a perfect stranger version 1and from the 99 demos( since this was written a cd called better late than never containing 17 songs featuring teh mans best friend demos, and material recorded from 1986 -1999 andsports several different lineup changes .

it is the intention of the group to release cd by late summer99 they are looking for labels interested in licensing deals .more than likely it will be available directly from the band(again setbacks and the like played a role in stifling the conmtinuation of the original members. matt mccourt on a suggestion from metal blade's promo dept changed his evil genius trio to wild dogs and the group in this configuration did dates with RONNIE JAMES DIO, GREAT WHITE, DOKKEN BLUE OYSTER CULT and a rash of tribute bands. the group disbanded when mccourt and drummer pete laufman were offered jobs in a judas priest tribute that toured the western states as BRITISH STEEL meanwhile back at the ranch....in march of last year after a long abscene deen castronovo contacted matt and jeff aagaian and started off on another round of songwriting which lasted a bout 3 weeks and yielded a few riffs but nothing substantial- and then off on a corn dog and manure tour(journey state fairs) finally i called jeff and said man.. we gotta get someform of this band togethe rand play just becasue.. so we got tom moller down form seattle and bashed it out for a weekend at man in black studios, then kept on going with bryce van patten of jester's moon on drums for a few weeks rehearsing for dates with skid row and blue oyster cult we contacted deen who was up for teh gig and during the rehjearsal the night before the gig we got a call saying skid row cancelled( i heard from the people up north that it wasnt as exciting without kiss on the bill)

so we havent heard form deen since then... its been a couple months so until the aliens let him back to earth...

we shall see whats next...in the meantime a new cd called out for blood which features teh original memebers and dates back to 1981-clear to present day recordings of songs we thought were lost or destroyed...

BACK TO WILD DOGS HOME